You are here: Home » News » Casino Niagara Gets $7 Million For Upgrades 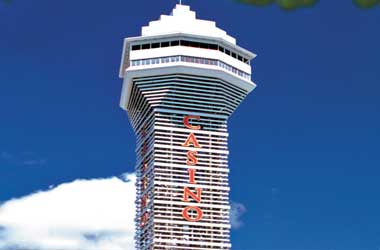 Casino Niagara located in Niagara Falls in Canada is expected to get a fresh investment of $7 million to upgrade its facilities.

Richard Taylor, vice president of operations for Niagara Casinos made the announcement during the casino’s 20th anniversary celebration. He said that $3.6 million will be invested on improving Casino Niagara’s facilities while a further $3.6 million will be put towards its gaming technology.

John MacFarlane, senior vice president of gaming for Ontario Lottery and Gaming (OLG) said that the state government body was committed towards ensuring that Casino Niagara and the Fallsview Casino, which is the other casino in the vicinity remain relevant to customers’ needs.

Explaining the plan for upgradation at Casino Niagara, MacFarlane said that currently food and beverage facilities were being revamped and in the New Year the gaming floor and the casino entrances would be upgraded. Speaking on the occasion, Mayor Jim Diodati highlighted that the city council had voted unanimously calling for Niagara Falls to remain the top gaming destination of Canada

In a statement Mayor Diodati said,

Our message to the OLG, our message to the province is invest here, build your theatres here, invest and upgrade your casinos here. We have upwards of 2:1 private to public-sector investment. The first 20 years were pretty incredible, pretty transformative and we believe if we make the right decisions today that tomorrow will be that much better.

He stated that the casinos have played the role of a catalyst for growth and investment in the region. To mark the occasion Niagara Casinos presented a $100,000 cheque that will be distributed equally between five local organizations to support development initiatives. These institutions are Project Share, Niagara College, Niagara Community Foundation, One Foundation for Niagara Health and Niagara Falls Tourism.

Taylor noted that giving back to the community has always been a top priority for the company. He pointed out that over $20 million has so far been distributed for programs to benefit local citizens.

Carol Stewart-Kirkby, executive director for the United Way of Niagara Falls and Greater Fort Erie said that The United Way had received more than $4 million over the last 20 years from the casino, with the largest contributions coming from payroll deductions, special event and annual corporate gifts Stewart-Kirkby went on to say that thousands in the local community have been supported by Casino Niagara’s investment and the shared vision between the casino and the United Way.